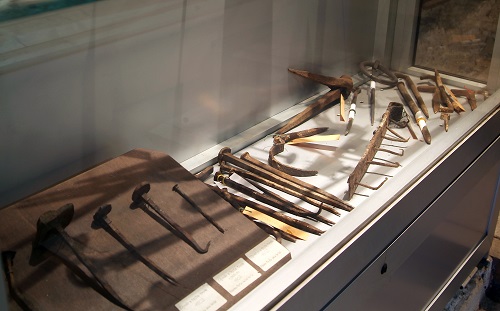 In 1991, Enrico Guidoni, together with the writer, proposed a national, regional, and local project to implement a new type of museum. The project aimed to realize a museum reconstructing that solid link between city and countryside that is at the base of every type of intervention, which has always characterized the birth and development of historical settlements. A museum that identifies itself through the study and conservation of materials and building traditions, thus contributing to a new awareness of historical-environmental values.

Not a City Museum but it wanted to be a place where, through the recovery of a territorial dimension, even small and medium-sized settlements can be enhanced by making the museum an instrument of knowledge, education and protection.
With the initiative of the Museum at its headquarters in Vetralla, it is hoped to concretely renew the city’s history and its artifacts to the history of the country, seen as a meeting place between the natural environment and rural civilization.

The project is adjacent to the museums of peasant work or popular traditions, but it is a collection of those instruments at the base of the knowledge of every artisan who knew how to use them wisely, adapting them to individual needs; crafts that are an integral part of those areas considered minor which constitute, in today’s world, a rich resource for a correct protection of our cultural heritage.
The purpose of the Museum is to spread culture through the knowledge of what the civil community has created through the exhibition of objects, but, above all, through an activity where the Museum becomes a promoter, protagonist, inspirer.

It is important, to this end, the choice of the building where the Museum is born, as it must arouse an immediate emotion on the visitor who is in contact with a harmonious environment, respectful of his historical condition. All the initiatives promoted by the Museum lead to a single goal, that is to create culture in order to obtain greater respect for the historic city that lives with its territory, to recover the spirit of place by observing the details, to find local specificities to defend and preserve the beauty of diversity that results from this close relationship between the city and its territory.

The Museum of Vetralla, set up in the temporary location in Piazza Don Pallini, moved to its current location in Via di Porta Marchetta since 1993. Thanks to its particularly territorial cut, extended to all the historical centers of Tuscia, it has been included, since its birth, into the circuit of the demoanthropological museums of the Lazio Region.
The historic building houseing the museum is the ancient Tower of Porta Marina, that was built in the fifteenth century to defend the north-western part of the medieval walls. Part of these walls are still visible today. The building, transformed in modern times and used for wine storaging and bottling, still retains traces of the processing plant and a large cellar for housing the barrels.

In the entrance area, a grain pit, located outside the medieval walls, then used as a butto, included in the museum so to have the opportunity to go inside to inspect it. The exhibition is divided into four sections: ceramics and brickworks, steal-metals, wood, masonry/stone section, and develops on the three levels of the building; each section is dedicated to the instruments related to the processing of different raw materials and to some categories of objects.

New developments, the Museum System of the University of Tuscia (SMA)

Since 2008, the Museum, donated by Enrico Guidoni, is an integral part of the Tuscia University Museum System. Under the guidance of a technical-scientific Committee, formed by the scientific managers of the various collections (currently 14), chaired by the President and with the help of a highly qualified staff unit, the SMA has carried out, in these first ten years, an intensive activity aimed at students, researchers and citizens. The aims of the SMA, in fact, are manifold also due to the variety of its collections, covering both scientific and humanistic fields.

Formerly Associate Professor of Medieval Archaeology (Unitus - Viterbo, Italy). 2004/2010 - Coordinator of the PhD in Archaeology and Post-classic Antiquities curriculum (Roma-La Sapienza). 2007/2010 - Director of the post-graduated 1st and 2nd Level Master (TECAM - Unitus). 2008/ 2011 - Coordinator of the Bachelor's degree in Cultural Heritage (Unitus). 2012/2019 - President of the Scientific Committee of the Museum System (Unitus), Member teacher of the PhD in Historical and Cultural Heritage Sciences, Presidium member of the University’s Quality. She has to her credit more than 100 publications.