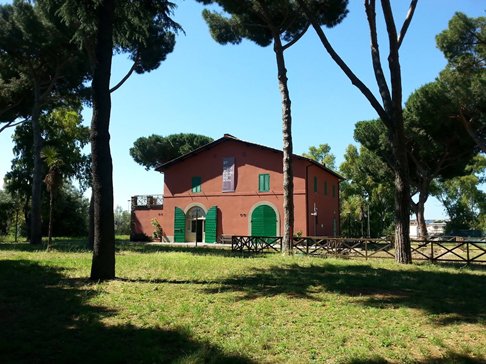 The Museum of Archaeology for Rome was opened to the public in October 2014; it is located inside the district of the University of Rome Tor Vergata, in an old “casale” called Villa Gentile built at the beginning of the 20th century on the remains of the so-called Torre Vergata (13th century), a tower which was built on the ruins of an ancient Roman villa.
The museum illustrates the results of more than twenty years of research carried out in the south-eastern part of Rome by Andreina Ricci in the context of the Centre for transformation of the territory (CeSTer) of the University of Rome Tor Vergata.

The Museum’s History Its history dates back to the latter half of the 1990s, when a survey of Roman archaeological ruins was carried out. All the data collected for the elaborations of the New Regulatory Plan of Rome were included in one of the management processes of the Regulatory Plan called the Charter for the Urban Quality. The study showed a huge presence of archaeological ruins covering all parts of the city, beyond the old Town which is surrounded by the Aurelian walls.

Many digs, recognitions and studies protracted during the 2000s, have allowed for the investigation of different archaeological contexts and to study settlements and frequentations that have persisted throughout the territory of Rome, seamlessly from the Roman age to today. This enormous archaeological presence therefore, had to be considered and studied, but also told in its relationship with the changes and growth of the modern city. Research and the relationship maintained over the years with local communities have led to different opinions regarding the relationship between archaeology and the city, and to the value which these ruins can have with their inhabitants.

The exhibition choice therefore went towards two main aspects of the ancient world: funerary cults and rites and life in villa. These aspects are illustrated through a clear, synthetic language, supported by video supports, drawings, 3D reconstructions and full-scale models. A selection of archaeological finds was chosen to be exhibited, not for their beauty, but for the effectiveness they had in the narration. Lastly the exhibition’s small space has permitted the use of technological systems, such as QRcode to provide the information of some aspects of the findings.

The exhibition is divided into four sections. The first room, Ancient ruins and contemporary city, welcomes the visitor by introducing them to the main theme that is the background of the project and concerns the different articulations of the relationship between archaeology and urban growth, from the end of the 19th century to the contemporary age, with some project proposals for the improvement of ancient ruins located in Rome outside the city walls

In the following exhibition rooms, the theme funerary cults and rites is illustrated by using archaeological finds coming from the digs of numerous necropolis, excavated between 1994 and 2009. The theme life in villa is narrated through the transformation of a peculiar building, the Villa of Passolombardo, an archaeological site which was in use from the 2nd century BC. to the 5th century AD. Some activities of the archaeologist are shown in the last section of the exhibition, from the different stages of research up to laboratory activities on ceramic and anthropological remains.

The exhibition project is flanked by numerous didactic-participatory activities, conceived and designed on various themes from the Roman world, dedicated to families and schools spending whole days at the Museum, also hosted in the picnic areas set up in the surrounding pine forest. Numerous other activities are also addressed to high school students and the adult public.

The Museum of Archaeology for Rome is today of great importance for the territory, and welcomes visitors from all over Rome and from numerous towns in the Lazio region, but (perhaps because it is well-known through social media and the website), it also attracts many visitors from other regions as well as foreign visitors.

Former Professor of Methodology and Technique of Archaeological Research at the University of Rome “Tor Vergata”; in 1994, she founded the Centre for the Study of the Transformation of the Territory (CeSTer), where she now holds the role of President of the Strategic Committee. She has been conducting archaeological research in urban suburbs for about thirty years with an interdisciplinary approach. She conceived, designed and directs the Museum of Archaeology for Rome. Currently, she is a member of the Scientific Committee of the Central Institute for Archaeology (ICA) and of the Archaeological Park of Appia Antica.

Administrative Technician at the Museum of Archaeology for Rome of the University of Rome “Tor Vergata”; she has collaborated in its realization. Currently, she deals with aspects related to the management of the Museum's activities and participates in projects of enhancement related to the territory. She has had experience in stratigraphic archaeological excavations, developing skills also in the technical-administrative aspects of archaeological sites, in the photogrammetric archaeological survey, in the processing and management of data for territorial analysis through GIS systems and new diagnostic technologies.