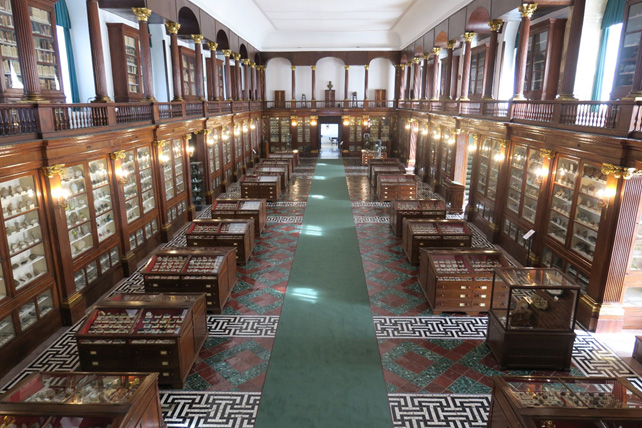 During 1992, the historical museums of Mineralogy (established in 1801), Zoology (1813), Anthropology (1881) and Paleontology (1932) of the Federico II University have merged into the Museum Centre of Natural Sciences, a structure strongly desired by the leaders of the University.

After an initial rearrangement of the historical exhibition halls, spread into several prestigious locations (Via Mezzocannone 8 and Largo San Marcellino 10) and a deep reorganization and rationalization of the important collections, the four scientific museums definitively opened to the public on 7th May 1994. In 2012 the Museum of Natural and Physical Sciences joined the Museum Centre, and the current configuration was reached: Museum Centre of Natural Sciences.

Recently, about 30 years after its opening, the Museum of Anthropology acquired new spaces, allowing to display further thematic collections of the rich cultural heritage of the Museum, so far confined in deposits.

As part of the further developments of the Museum Centre, developments began for the preparation of the Chemistry Museum, which will also be housed in the Mezzocannone 8 complex, where four of the five Museums already exist. Currently the Museum Centre spread all over an area of about 5,000 square meters and houses over 160,000 exhibits from all over the world.

The Museum Centre, with initiatives undertaken over the course of almost thirty years of activity, under the scientific and administrative direction of prof. Silvana Filosa and subsequently by prof. Maria Rosaria Ghiara, currently allows numerous visitors (University students, private citizens and in particular schools of different order and degree) to approach the world of Natural Sciences, retracing the evolution of scientific thinking and the history of the collections gathered in about two centuries of activities in the prestigious buildings of Federico II University.

In particular, during the aforementioned project of reorganization of the important historical collections, an attempt to combine the historical traditions, consolidated over the centuries of University’s activity, with the creation of structure that meets the modern criteria of museology, was made.

A heritage enriched over time

The prominent museum patrimony, continuously enriched (e.g. the Allosaurus fragilis at the Paleontological Museum, in 1996) with items of significant historical value, in one with the prestigious urban and architectural location of the buildings, represents a uniqueness at international level.

The historical collections mainly testify the important work of illustrious and famous researchers who have worked over the centuries in the Federico II University. Some of them achieved significant results in the field of human and natural sciences and rose to prestigious positions in the international scientific scenario, thus bringing prestige and honour to Neapolitan schools and institutions. For all these scientists, there is a clear and documented link evidence all over the museums of the Museum Centre.

The Museum assumed increasing skills and visibility, currently allowing to be identified as a reference media institution for the dissemination of the scientific culture, due to the already-mentioned uniqueness in combining historical scientific collections and architectural heritage.

Moreover, the Museum Centre actively works for the service of the local community (especially in the so-called Third University Mission: direct application, enhancement and use of knowledge to contribute to social, cultural and economic development of the civil society) by promoting conferences, seminars and activities devoted to schools of different levels and degrees, through guided visits, laboratory experiences, temporary exhibitions on both scientific and artistic subjects.

Of course, the Museum Centre commitment in the field of scientific research should also be mentioned, mainly for updating studies on collections with modern technologies and analytical techniques. Numerous agreements are active with various University Departments and CNR Institutes, allowing the staff of the Museum Centre to produce several scientific papers.

He is full Professor of Geo-resources and Mineralogical-Petrographic Applications for the Environment and Cultural Heritage since 2014. He served as Director of the Department of Earth Sciences, Environment and Resources (Federico II University of Naples), Vice-President (2016-2017) and President (2018-2019) of the Italian Society of Mineralogy and Petrology. Currently, since November 2018, he is Director of the Museum Centre of Natural and Physical Sciences at Federico II University of Naples.