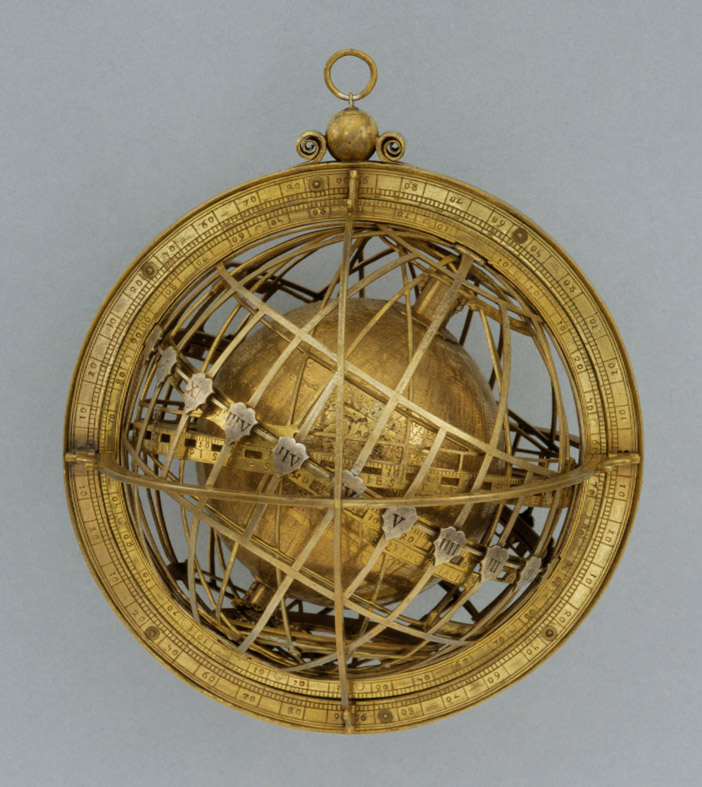 The Jagiellonian University is the oldest institution of higher education in Poland. It was founded in 1364 by the King Casimir the Great (1310-1370), based on the Pope`s Urban V will (1362-1370). Renovated in 1400, it is still functioning to this day. Throughout the centuries many artefacts linked with its activity ware preserved, among them are scientific instruments presented in the Jagiellonian University Museum. Only a small percentage of objects, especially among the oldest survived; for example, among 17 instruments left by Matthias de Miechow (1457-1523) none was preserved. Among 36 items on the list of some 50 instruments of legacy from Joannes Broscius (1585-1652) only three are safeguarded today. One of them is the mechanical armillary sphere known from 1900 as the Jagiellonian Globe.

The Globe, a mechanical armillary sphere

The object is an early mechanical armillary sphere (13 cm in diameter), made in France before 1510. The sphere consists of the rings representing coordinate systems: ecliptic, equatorial and horizontal. It is made of brass and of hammered copper plate, the whole object is gilded. All this is an astronomical instrument which can be used as universal clock (showing local solar time and sidereal time), and as a Julian calendar. Its clock mechanism is contained inside the central brass sphere on the surface of which a map of Earth is engraved.

Jagiellonian Globe is a wonderful historical treasure of 16th century cartography: the map of Earth is dated for 1510-11. The time of its origin and the display of continents correspond to the globe of Hunt-Lenox (ca 1510), preserved in New York Public Library. Most probably both of these globes had their origin in the world map from Cosmographiae introductio (Saint-Die, 1507) which formed an introduction to Geography by Ptolomy (ca 100-168) on it the name America appeared for the first time. The author of this edition was either Martin Waldseemüller (1470-1520) or Mattias Ringmann (1482-1511), or both: to it were joined letters of Amerigo Vespucci (1451-1512) and a globe.

It is the oldest globe with the name of America. America noviter reperta (Newly discovered America) is situated on a continent-island in the eastern part of southern-hemisphere. The base for drawing the continents and their topographic details is made of geographic coordinate system, while the map is presented with surprising precision, though the globe is only 7,5 cm in diameter.

Unfortunately, the globe is anonymous although, according to the opinion of Bożena Modelska-Strzelecka (1974), it can be linked with Florentine cartographer Francesco Rosselli (1445-before 1513). Modelska-Strzelecka based her conclusion on the technique of map fabrication, as well on the way the topographic details are represented. She took into consideration three maps: planispheric Contarini-Rosselli (Padua 1506; British Library, London), oval mappamondo (1508, Biblioteca Nazionale Centrale, Florence) and Carta da Navigare (before 1506, National Maritime Museum, London).

The origin of the Globe

This Globe belonged to Joannes Broscius, mathematician, geometer, astronomer from Kraków, who studied in Padua (1620-1623). Maybe he bought it while his stay in Italy, but the details about it are very scarce, only few documents.

At the beginning, the Globe was suspended on the top little ring. In 18th century the clock mechanism was modernized by introduction of balance wheel with hair (after 2nd half of 17th century). This is why ever since, the Globe is mounted on the tripod stand.
This exceptional instrument of Franco-Italian origin is an important academic treasure. Astronomy, horology and cartography are illustrated in this monument of technical expertise. It is also a beautiful object of art and shows a high-level metal craftsmanship.

During World War II, it was hidden from Germans by University staff and saved from certain relocation to Germany.