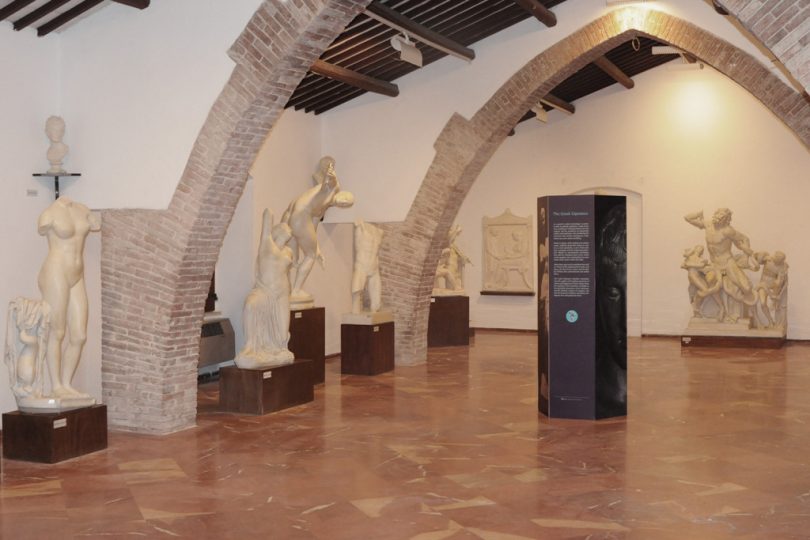 The Plaster Cast Gallery of the University of Perugia was founded thanks to the cultural vision and the antiquarian taste of Filippo Magi (Sesto Fiorentino 1905 – Roma 1986), who opened its doors in 1970. Led by educational purposes, he wanted to offer to his students a space to admire copies of Greek and Roman masterpieces, whose originals are placed in museums all over the world.

The collection started small, with few pieces at first, but today it includes almost 86 plasters casts exhibited in two big rooms, that were once used as storerooms of the Palazzo Pontani medieval palace (via dell’Aquilone, 7). The Athenaeum Centre for Scientific Museums (CAMS) recently carried out the restoration of these spaces, together with the cleaning-up of the statues, so that the Gipsotheque is now open to visitors, being possibly conceived as a modern cultural exhibition.

The History of Collection

The history of the Gipsothèque of the University of Perugia goes hand in hand with the development of Perugia as an academic and cultural center of the last 50 years.
In the Sixties, shortly after the foundation of the Faculty of Humanities in Perugia, was also created the Archaeological Institute, where Filippo Magi, the “father” of the Gipsothèque, taught both Classics and Etruscology. At that time, starting from 1954, he was also Director of Vatican Museums and he had the chance to get plaster copies directly from the original ones of Vatican Museums. Even though at that time Gipsotheques were quite unusual for Italian universities, Filippo Magi continued to expand the collection until 1980, up to its current size.

The plaster copy of the statue of Laocoön is the spearhead of the whole collection. The Greek original, a masterpiece of the Rodian school, no longer exists, but a lot of Roman marble copies have been found. After the original missing arm of Laocoön was discovered in 1905 (the so called Pollak arm), the restoration was made using casts and one of them was bought by the University of Perugia in 1962.

The collection is now divided into three parts: the Greek, the Etruscan and the Roman one. The wide Greek selection is located upstairs and includes 56 casts of statues, busts, heads and reliefs; the artworks are not shown in chronological order. The visitor can admire, for example, the capital of the Eretteo, set on a revolving base, the Ares Ludovisi, the Apoxyomenos, the Discobolus, the Venus of Milo, and the Parthenon marbles

The visit continues in the lower hall, where Etruscan and Roman plasters are displayed. Here, the attention is immediately captured by the colossal the Nile River: this is an excellent example of high artistic craftsmanship. On the end wall, there are copies of two well-known reliefs: the Tellus panel of the Ara Pacis Augustae, and Bas-Relief of the Antonine Column, representing the apotheosis of Antoninus Pius and Faustina. A plaster copy of the statue of Augustus from Via Labicana stands between them, while on the right a wide collection of Roman portraits can be admired.

Among the Etruscan plaster casts, we mention the Sarcophagus of the Spouses, made in two jointed parts, and two copies of bronze sculptures: the Mars of Todi and the Chimera of Arezzo, both in dark colour to mimic the oxidized bronze.

Though the circumstances today are hugely different from sixty years ago, the Gipsothèque of the University of Perugia is still useful and worthy of existing as a ‘place of art’. Born to teach the canons of classical beauty, it can be appreciated today as a physical symbol of our great craftsmanship tradition. Reuse of the collection space and the new appearance of the exhibition in Perugia revive the possibility of using the Plaster Art Gallery as a modern cultural display.