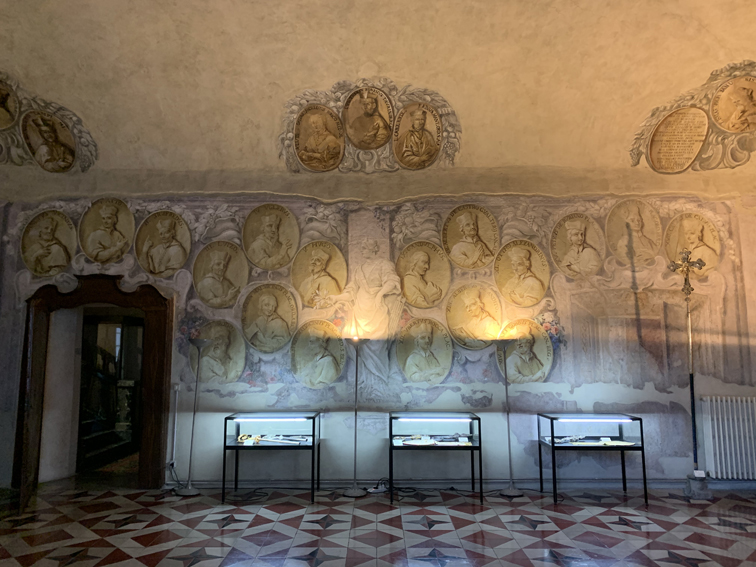 The history of the Diocesan Museum of Bobbio (Piacenza), although recent, is rooted in the centuries-old socio-economic structure of the town that hosts it. It was founded in 2014, one thousand years after the birth of the diocese of Bobbio with the installation of the first bishop Pietroaldo, inside the bishop’s palace overlooking the central Piazza Duomo.
The itinerary winds its way through ten rooms in which silverware, vestments, paintings and sculptures bear witness to the history of the local church and have become the protagonists of the museum project aimed at enhancing the cultural heritage and created during the episcopal term, which ended in 1973 with the death of the last, seventieth, bishop Pietro Zuccarino.

The collection of the Diocesan Museum of Bobbio

The collection consists of about 150 objects from the territory of the diocese of Bobbio (since 1989 diocese of Piacenza-Bobbio). A panorama which geographically embraces Liguria and Emilia Romagna and which, today as in the past, acts as a trait d’union between the two socio-cultural realities. It is a growing collection, ranging from the most contemporary silver chalice by the Georgian master Goudji to the
Gothic crosier of bishop Mondani dated 1479. Rich post-Tridentine missals and precious illuminated volumes such as the choir antiphonary from the end of the 14th century come from the Rococo walnut archive commissioned by bishop Cornaccioli between the 1920s and 1930s. The paintings include works by Francesco Bassano (1549-1592), Agostino Santagostino (1635-1706), Giovanni Andrea De Ferrari (1598-1669) and Daniele Crespi (1598-1630).

The author’s recent master’s thesis contains an unpublished catalogue of the works preserved and exhibited in the museum. The inventory and cataloguing of the artworks, many of which had not yet been catalogued, are an essential tool for the socio-cultural identity of the museum, whose activity is closely linked to the interconnection and development of the network of ties that link it to the territory in which it is located. The catalogue lays the indispensable foundations for the knowledge, protection and conscious valorisation of assets in danger of being forgotten

The responsible valorisation of heritage implies the adoption of an integrated viewpoint that certainly aims at safeguarding the conservation integrity of the work, but that at the same time is able to grasp the more subtle facets in which visitors’ attitudes are expressed. Starting from the assumption that the individual can use, enjoy and therefore participate in the interpretation of the museum provides a key
to understanding that shifts the approach from passive to proactive. Museums that see in the number of visitors only an economic opportunity betray their own identity and the conceptual root of their mission.

The future of the museum

Emphasising that the museum belongs to a specific locality is not a simple geographical specification. In the strategic planning of the municipal cultural activity, the role played and the potential of the museum activity is an interesting factor. First of all because it is important to involve people who, if properly sensitised, are able to
generate affection not only for the museum itself but also for the territory that hosts it. This is the case of the repositioning of the image of some places that have exploited and exploit the support of museum activities to rehabilitate or change the perception that individuals have of them.
The museum is also the flywheel of choice for the transmission of new
ideas, for the treatment or resolution of controversies or conflicts that afflict societies today. Precisely because of its orientation towards perpetuity, because it acts as a transmitter between the past and the future, the museum can accommodate and manage the most difficult cultural conflicts and act as a moderator