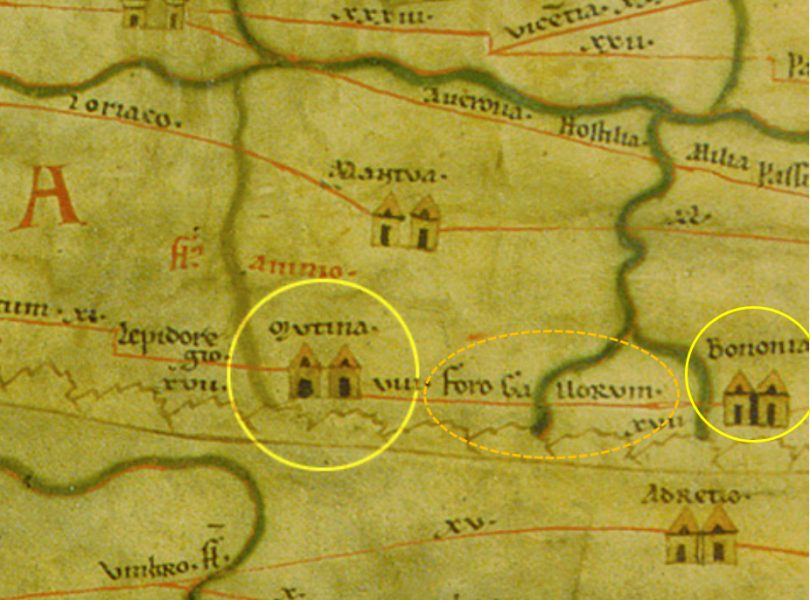 Boundary, limes and/or limen, Latin words between limit and/or threshold, an area that indicates a limit: a line of demarcation that univocally determines a relationship of inclusion or exclusion. A space that lies between things and that, by putting in contact, at the same time separates and, by separating, puts in contact different cultures, identities and spaces.

The border is contact, the frontier is a boundary, a line of demarcation, a zone of transition in which the identifying characteristics disappear, so much so that the frontier cities, already in the early Middle Ages, became peripheral centers. There are cities that are located on the border and cities that have the border within themselves as Castrum Francum and Borgo Nuovo, between the Roman colonies of Mutina (Modena) and Bononia (Bologna).

Before the Borgo Franco Bolognese of Castel Franco the Forum Gallorum of the Roman age, indicated in the Tabula Peutingeriana, is characterized as a forum, a market center built on the consular road Emilia. This settlement between the two important colonies of Mutina and Bononia is located on a natural ridge of the plain, a raised bump between swampy areas, probably on a cone of an ancient river and is positioned as a junction between routes and position of the main waterways and bridges crossing.

Umbrians, Italics, Ligurians, Etruscans, Celts, Romans, Byzantines, Lombards, Franks, citizens of the enemy towns of Modena Ghibelline and Bologna Guelph, nobles and commoners of the Papal State or of the opposing Duchy of Este lived together and inhabited the millenary border of Scoltenna from opposite sides: between Panaro and Reno on both sides of the Apennine ridge that ends in Bazzano and unravels with a variable and diachronic path in the high and low plain.

In the area of the perennial limes (border) – where the Modenese and Bolognese territories were divided in Roman times, in the center of the newly founded city of Castello Franco, marking the boundary of the church of Santa Maria Assunta – appear the border signs, the stones engraved with the monograms of the opposing states of the cities that have always been enemies: Bologna and Modena. In the same church, right in the heart of the disputed border, the statues of the patron saints of the two cities, San Petronio of Bologna and San Geminiano of Modena, face each other.

1228 is the year of the end of the construction of Castel Franco and the beginning of the civil community; 300 families settled in the castle and in surrounding houses. The land where the castle was built was owned by the Abbey of Nonantola and a bull of 1228 authorized to move in the castle, in addition to the inhabitants of the nearby villages, the two neighboring churches, Santa Maria di Ambiliano, belonging to the Pieve of San Giovanni in Persiceto, and San Giacomo del Borghetto in strada, belonging to the Pieve of Monteveglio.

At the beginning, the border defense system consisted of embankments; the construction of brick walls is documented at the end of the 13th century. Living in this border town was not easy so, in spite of the tax exemption for the families that moved there, in 1249, there were only 211 of them. The municipality of Bologna was therefore forced to make a new call for families and so again in 1290.

This Castle Franco is the result of a dual soul. This status remains for over a thousand years: the village of the double. It has two churches, two pharmacies, two main cafes, always opposite each other and aligned on the Via Emilia, already in 187 BC drawn as a border road.

The building of Castello Franco by the Bolognese is part of the policies of appropriation of the territory by the major centers throughout Italy and Europe between the 12th and 13th centuries. These new towns were built in order to channel the increase in population to places where borders could be defended.

The enemy Modena, just a few hundred meters from Castello Franco, built Castel Leone, a similar fortification on the axis of the Roman Via Emilia.

This border area was populated not only by customs and bridges, but also by taverns, such as the Zocca Modenese that faced the Corona Bolognese. It is no coincidence that the tortellino was born right in the middle of the two opposing cities of Bologna and Modena. For this reason neither of them can still claim its genesis and paternity.

In this territory there are noble villas, such as Villa Solimei, crossed in the middle by a border line that divides the building in two, right in the ballroom where the two rivers Reno and Panaro are painted on the walls facing each other.

In this area, even in the twentieth century, were celebrated the feasts of Mutino/Felsinee, organized by great personalities such as Angelo Fortunato Formiggini for Modena, Giovanni Pascoli, Giosuè Carducci, Olindo Guerrini for Bologna.

In 1929, Benito Mussolini, the head of the Government, worried about the disruptive political rise of the then mayor of Bologna Leonardo Arpinati, decided to move Castelfranco, the largest municipality under Bolognese jurisdiction, from the Province of Bologna to the Province of Modena, in order to weaken his position, thus expressing a political use of the border theme.

The philosophy of the border

In the framework outlined so far, it is clear that the territory explicitly manifests the historical development and shows its identity. And this happens in particular in Emilia where the pre-Roman settlements are interpolated with the Roman ones with location in relation to the roads of the Apennine ridge and with border values. And in this being of these particular areas there is at the same time a theme of sociality and symbolism and religiosity.

The limes, border, is the result of battles and risks, not a limit established but conquered in a continuous becoming. Over the centuries, the limes is configured as limen, a threshold that allows the passage as a condition of the encounter-communication relationship.

Architect, winner of the Edoardo Collamarini prize; scholar of territory history, student of Saverio Muratori school, author of several essays on building and territorial typology, he organized conferences and seminars on various topics in the field of architecture. He has been a university lecturer at the Faculty of Engineering/Architecture of Bologna; formerly officer town planner at the Modena Municipality and then architect at the Superintendence of Monuments of Parma and Bologna where he has held managerial roles. Author of restoration projects and direction of works on historical and artistic heritage in several Emilia cities.